We do non-threatening, interactive musicals with a message for children 3 – 9 years old.  The Los Angeles Times calls us “simply the best at what they do”, and Los Angeles Magazine says we are the “best in the City for the squirmy set”. Most importantly, LA Parent Magazine’s recent parent survey ranked us as the No 1 children’s theatre in Southern California. 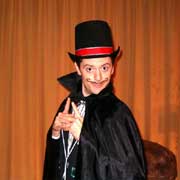 Storybook Theatre, founded by Lloyd J. Schwartz and Barbara Mallory Schwartz, has been pre- senting children’s plays for over 26 years at Theatre West. Storybook has won over 34 Valley The- atre League Awards, LA Parent has called Storybook “the best children’s theatre in the city,” LA Magazine says it’s, “one of the 200 reasons not to leave LA.” Matt Asner’s Autism Speaks Foundation, one of the world’s leading science and advocacy organizations, has recently partnered up with Storybook Theatre.

We offer reduced rates for schools, and weekday matinees at 10 am to accommodate lunch needs.  Storybook Theatre also is available for theatre games at the theatre, or its professional actors will come into your school for an unforgettable session. More About Education