Portraits of Humanity: A Series of Solo Shows 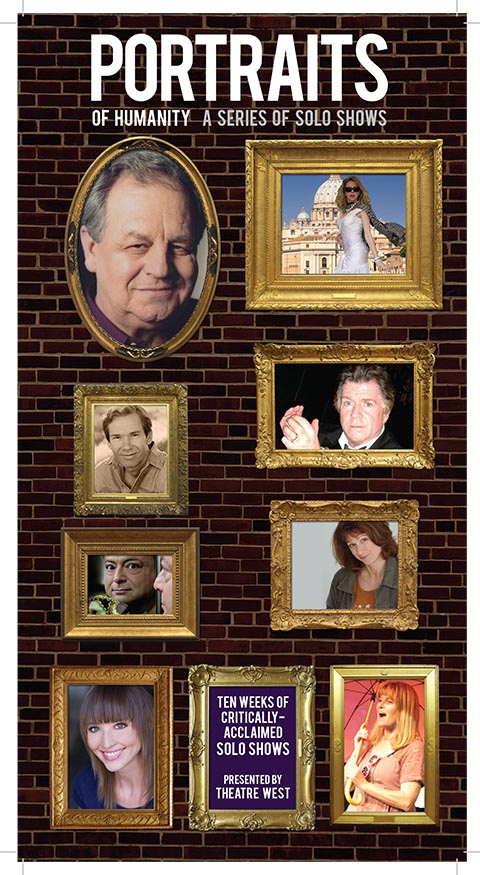 Mostly funny, often touching, this veteran character from TV and movies takes you on a journey through his sixty years in show business. 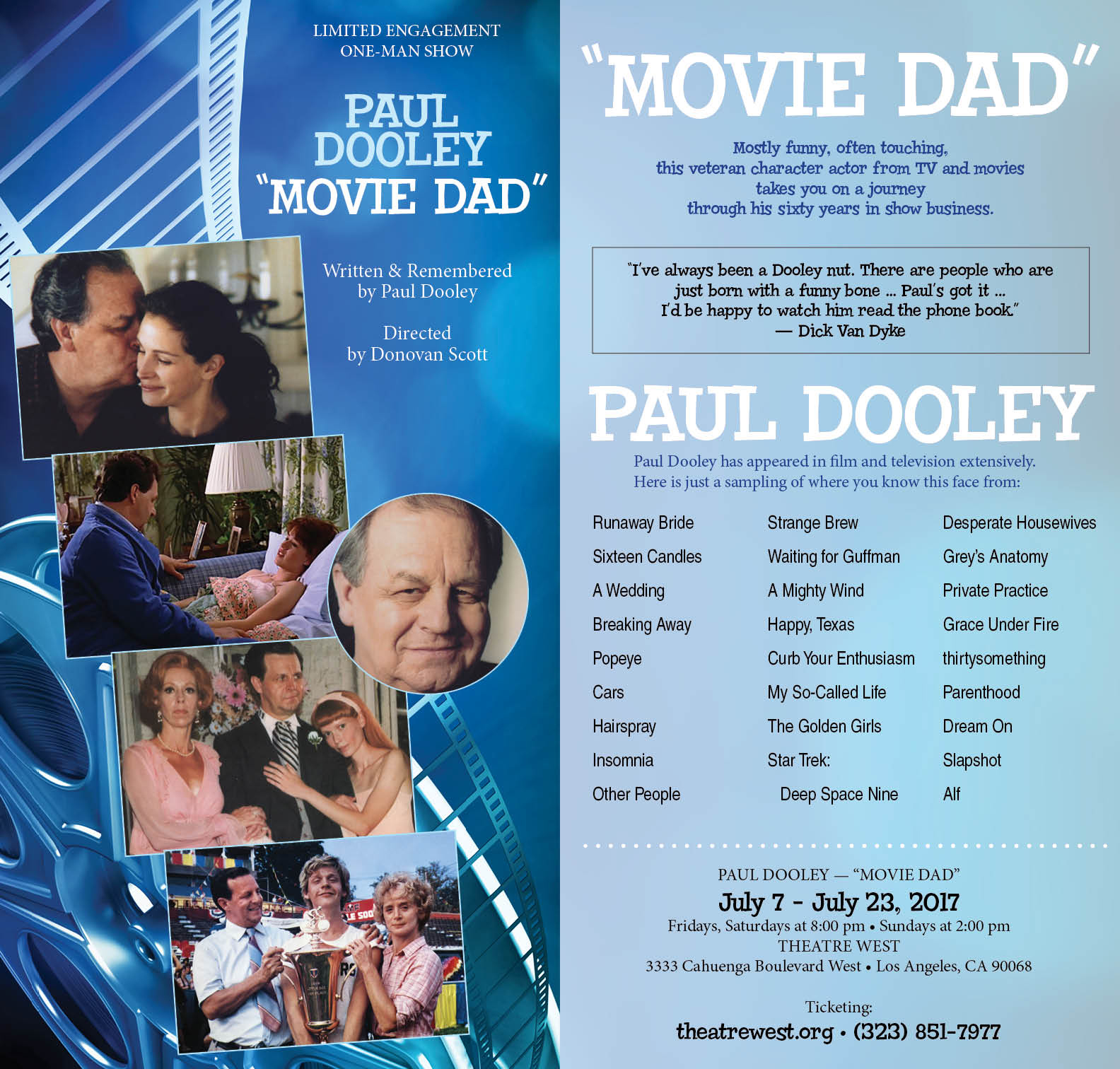 Dina Morrone
“The Italian In Me” 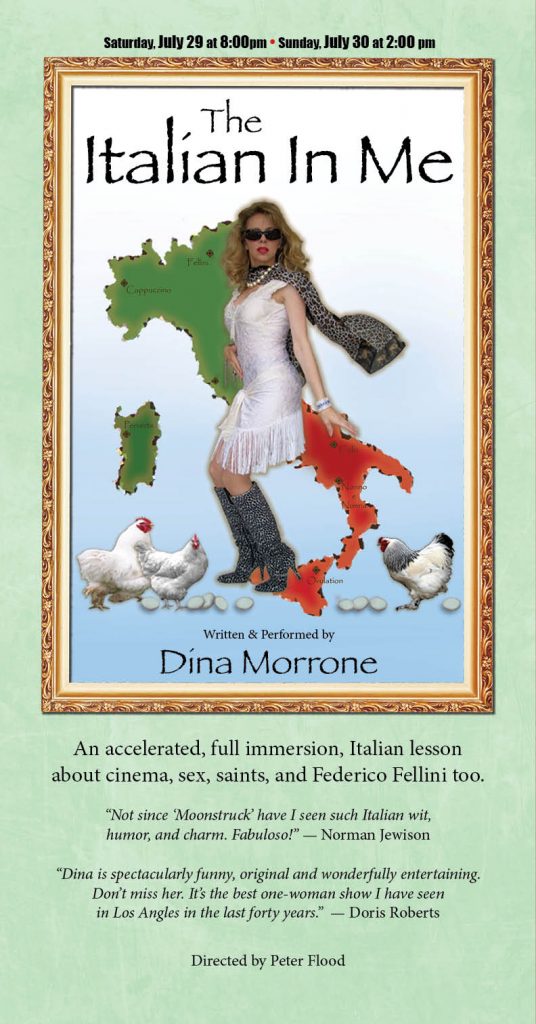 ABOUT THE SHOW • In The Italian in Me, a doe-eyed aspiring actress from Canada – who has been raised on a heaping dose of old-fashioned values & Roman Catholic guilt – upends her life by moving to Italy. With her, she brings a tiny bit of cash and grandiose dreams of working in Italian Cinema.  Once in Rome, she quickly discovers that things in the Eternal City are not quite as holy or as romantic as she had imagined. Her days are filled with countless fruitless encounters with perverts, priests, producers and statues of Saints in old churches, to whom she pleads for help. But help does not come. Not even a chance siting of the Pope at St. Peter’s brings her any closer to her dream. When all hope seems lost, she meets the cinematic Maestro himself, Federico Fellini at Cinecitta’ Studios for what turns out to be a very “illuminating” encounter, but will it be the ‘Dolce Vita’ she was searching for?

A beloved actor’s journey through a wonderful life.

ABOUT THE SHOW • Hear one of Hollywood’s favorite storytellers share tales of early Hollywood — his film triumphs, his youthful misadventures with lifelong pal Henry Fonda, his amorous exploits with some of movie land’s leading ladies, and his personal stories of wartime and family.

Abbott Alexander
“One Night Beyond”

No rabbits, white gloves or girls in tu-tus — just the mystery and wonder of pure enchantment sure to blow your mind! 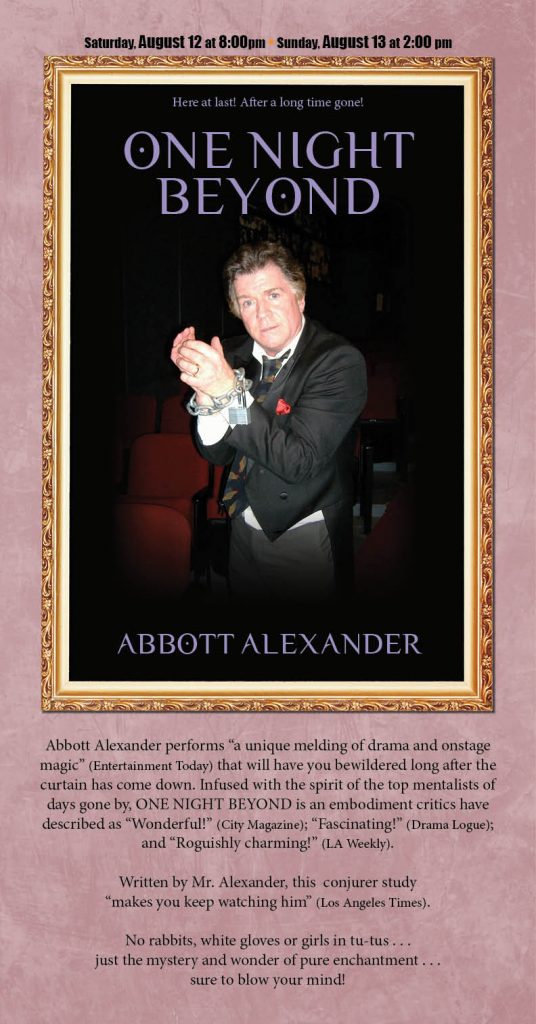 ABOUT THE SHOW • Abbott Alexander performs a “unique melding of drama and onstage magic” (Entertainment Today) that will have you bewildered long after the curtain has come down. Infused with the spirit of the top mentalists of days gone by. One Night Beyond is an embodiment critics have described as “Wonderful” (City Magazine), “Fascinating!” (DramaLogue) and “Roguishly Charming!” (LA Weekly) 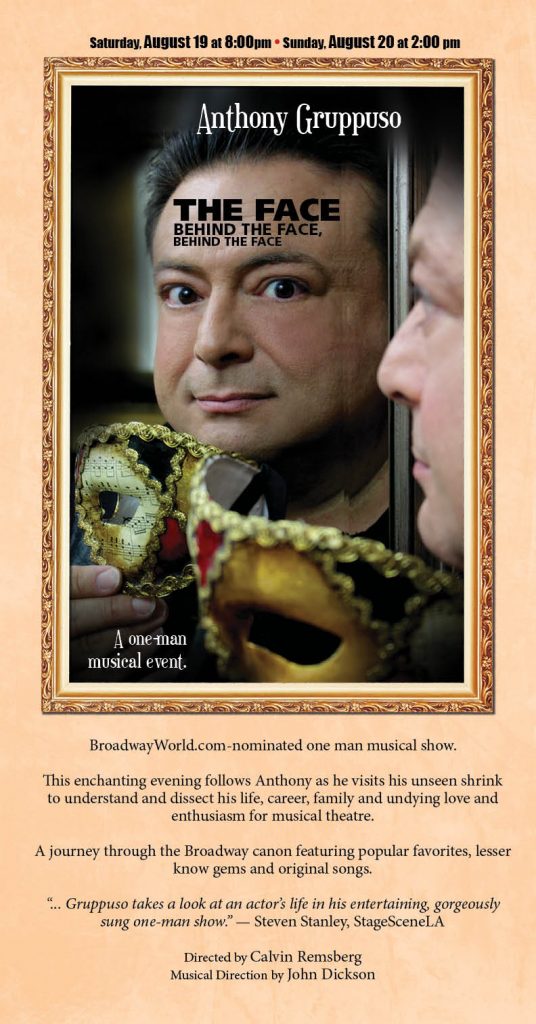 Amy Simon
“She Is History”

A comedy about women who make and made history 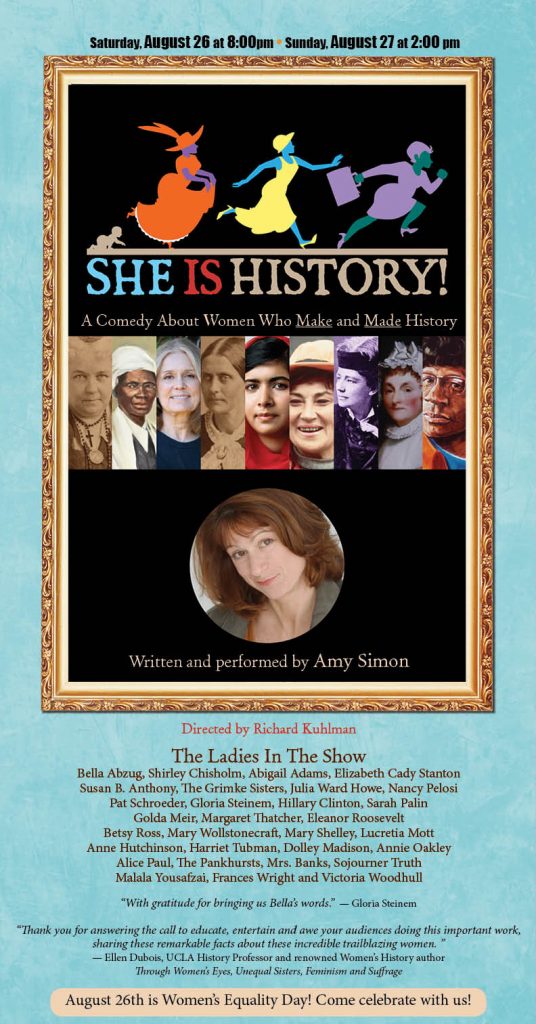 Why Do We Know More About Kim Kardashian Than Abigail Adams?
Amy Simon knew something needed to be done when her ten-year-old daughter came home from school, stating she was planning on doing her women’s history project on Cher, or Janet Jackson.
Combining theater, history, multi-media, audience interaction, and good old-fashioned story telling, SHE’S HISTORY! brings to life the true tales of fabulous females, then and now.
LA’s longest running solo show.
Writer/Performer/Cultural Herstorian Amy Simon spent years researching diaries, letters, publications, and biographies and created this unique herstorical and often hersterical edutaining theatrical presentation.  Going back and forth from the past to the present, this Mom On A Mission poignantly finds the funny as she chronicles the struggles and accomplishments of our unheralded, unknown and forgotten heroines whose courage and strength inspire her as she raises two daughters.
Watch Elizabeth Cady Stanton and Susan B. Anthony multitask – just like today’s mom – running the house, fixing dinner and corralling the kids, all while working on the Fourteenth Amendment.  Hear about our first feminist writer Mary Wollstonecraft, and witness Sojourner Truth’s powerful Ain’t I Woman speech. Learn how Alice Paul stole President Wilson’s parade, and see how she suffered for the cause.  Watch Nancy Pelosi become the First Female Speaker of The House. Be inspired by courageous Bella Abzug, Shirley Chisholm’s humanity, indomitable Malala Yousafzai’s, Victoria Woodhull (the first woman to run for president) and Hillary Clinton.  Bloomers, suffrage, maternal profiling, the road to Seneca Falls, abolition and more are all there in a GAL-A-PALOOZA honoring Female America! 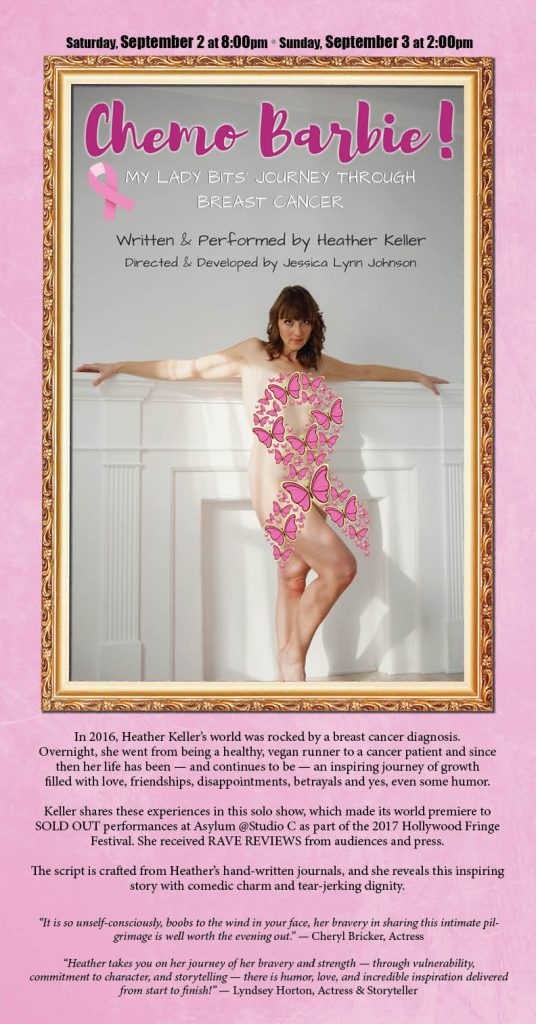 ABOUT THE SHOW • In 2016 Heather Keller’s world was rocked by a breast cancer diagnosis. Overnight she went from being a healthy vegan runner to a cancer patient and since then her life has been — and continues to be — an inspiring journey of growth filled with live, friendships, disappointments, betrayals and, yes, even some humor. Keller shares these experiences in this solo show that made its world premiere to SOLD OUT performances at Asylum @ Studio C as part of the 2017 Hollywood Fringe Festival. She received RAVE REVIEWS from audience and press. The script is crafted from Heather’s hand-written journals and she reveals this inspiring story with comedic charm and tear-jerking dignity.

ONE WOMAN GONE WRONG deconstructs the solo show genre and blurs the lines between real life and the stage for an unforgettable, heartfelt and hilarious experience 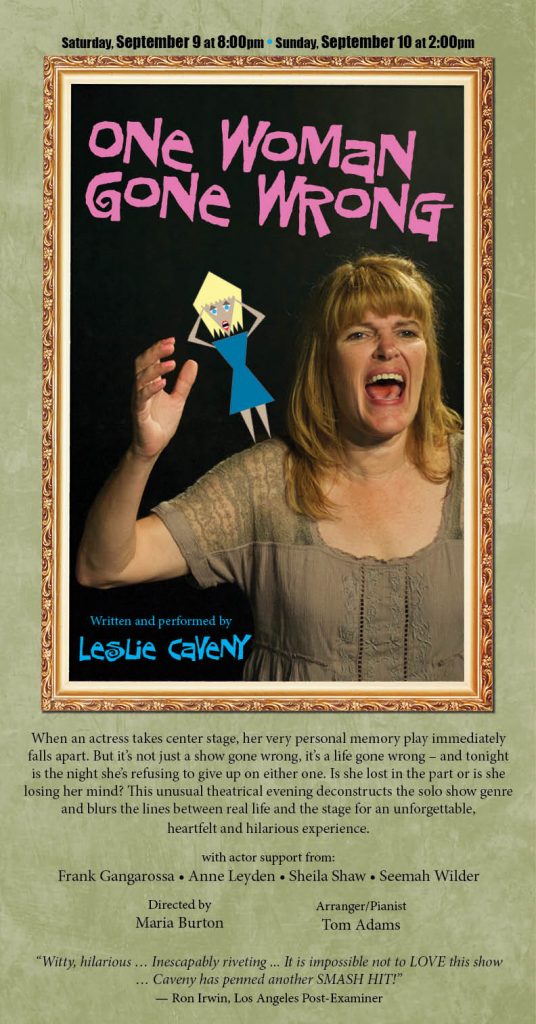 ABOUT THE SHOW • When an Actress (LESLIE CAVENY) takes center stage, her very personal memory play immediately falls apart. But it’s not just a show gone wrong, it’s a life gone wrong – and tonight is the night she’s refusing to give up on either one. Is she lost in the part or is she losing her mind? ONE WOMAN GONE WRONG deconstructs the solo show genre and blurs the lines between real life and the stage for an unforgettable, heartfelt and hilarious experience.